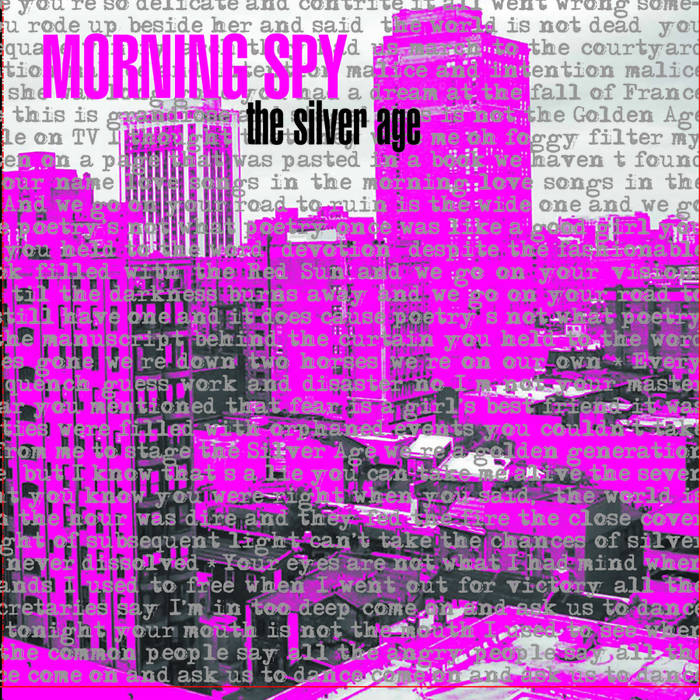 Morning Spy was a San Francisco-based indie pop band invested in electric guitar textures and fuzzy, yet intricate songwriting. Their debut LP, Subsequent Light, was released to modest obscurest acclaim, receiving positive reviews and eventually earning a spot on a handful of year-end "best of" lists. The limited edition Two Horses EP was released by KEEP Recordings soon thereafter to even better reviews.

Morning Spy toured throughout California and, in support of The Silver Age, much of the western United States. They shared the stage with such artists as Silversun Pickups, the Helio Sequence, Bound Stems, the Ex-Boyfriends, the Dying Californian and Minmae. Their music has received airplay from KCPR-FM (San Luis Obispo, CA), KZSU (Stanford, CA), CIUT-FM (Toronto), KSCU-FM (Santa Clara, CA), KUCI-FM (Irvine, CA), WMUC-FM (College Park, MD), Bagel Radio (San Francisco, CA), Radio XY and Jellyfish Radio and been featured in various television and film projects, including the independant films A Lawyer Walks Into a Bar and Emma as well as the CBS television show The Ghost Whisperer.

"San Francisco's Morning Spy split the difference between Dean Wareham's Galaxie 500 meanderings and the more focused pop of Luna--weaving through it all contemporary strands of indie rock." - The Portland Mercury

"Sugar-coated in malaise and abandonment issues on tape, The Silver Age bounces from the lo-fi indie folk that is gaining more popularity in the underground to the obscure art rock that lays out gorgeous pathways to excellence encouraging other acts to follow" - Smother

"Starting with an already-cultivated dream pop, mid-fi composite, the San Francisco quartet have built on their strengths with a trajectory somewhere between Destroyer and Grandaddy. Their new LP, The Silver Age (Keep and Abandoned Love), shows a quickly developing maturity in songwriting and production, with greater interaction between music and lyrics, and a mix that displays a well-toned sonic physique" - San Francisco Chronicle

Bandcamp Daily  your guide to the world of Bandcamp

Featured sounds by K.Spark and WIZDUMB, plus Basi joins the show to discuss his latest release.