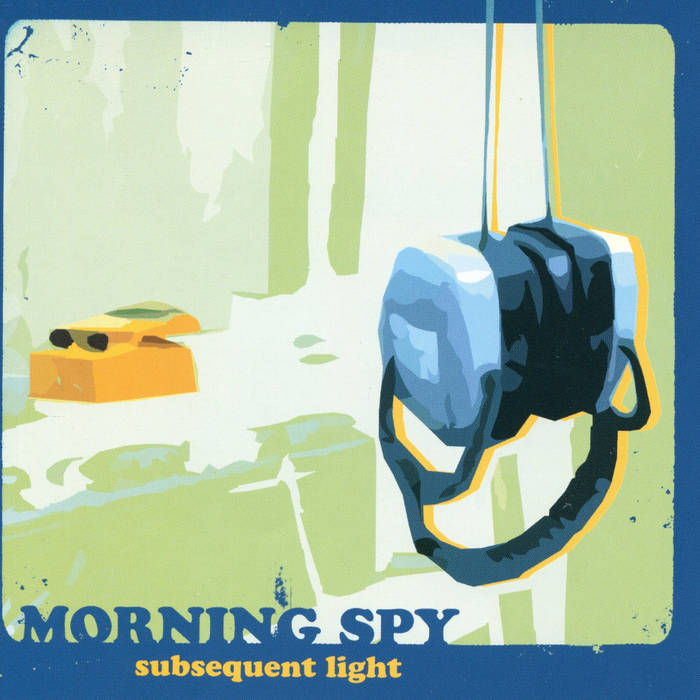 Morning Spy was a San Francisco-based indie pop band invested in electric guitar textures and fuzzy, yet intricate songwriting. Their debut LP, Subsequent Light, was released to modest obscurest acclaim, receiving positive reviews and eventually earning a spot on a handful of year-end "best of" lists. The limited edition Two Horses EP was released by KEEP Recordings soon thereafter to even better reviews.

Morning Spy toured throughout California and, in support of The Silver Age, much of the western United States. They shared the stage with such artists as Silversun Pickups, the Helio Sequence, Bound Stems, the Ex-Boyfriends, the Dying Californian and Minmae. Their music has received airplay from KCPR-FM (San Luis Obispo, CA), KZSU (Stanford, CA), CIUT-FM (Toronto), KSCU-FM (Santa Clara, CA), KUCI-FM (Irvine, CA), WMUC-FM (College Park, MD), Bagel Radio (San Francisco, CA), Radio XY and Jellyfish Radio and been featured in various television and film projects, including the independant films A Lawyer Walks Into a Bar and Emma as well as the CBS television show The Ghost Whisperer.

Have you worn out your copy of The New Pornographers's Electric Version yet? That's fortunate, because I have also, but thankfully I have gotten my hands on Morning Spy's debut LP, and things have been dandy ever since. Morning Spy aptly delivered the goods with their self-titled EP in 2002, and this time, they raise the bar once again with Subsequent Light, which is the perfect title for this successive release. It should be noted that this album is not just "more of the same," which is the case with a myriad other bands that find their formula and never expand on it. Three of the songs from the previous record are found here ("Accidental Stars," "Please Stay Out Late," and "All Romance") as well as eight more succulent honey-laced tracks. The addition of a second guitarist, James Spandaro, has led to a richer, more textured sound as the band re-recorded those three aforementioned songs. The results are impacting, and this band has achieved the potential that it has strived for since their earlier days as dream-pop fledglings. While Morning Spy's co-founder/bassist Jon Rooney still assumes full song-writing responsibility, he shares the duty with guitarist/vocalist Allison Goffman for "Vista," a fractured song with only four verses that are repeated frequently. As Goffman whispers "Don't let my smile go to sleep, I'm standing here staring at my feet," she evokes memories of The Jesus and Mary Chain as well as My Bloody Valentine's less chaotic work. If a song with lyrics about staring at your feet are not shoegazer enough, "The Sweet Taste of Joy" could alleviate that problem, as the harmonizing between Goffman and Rooney make it illegal to listen to this song anywhere other than your bedroom with your blinds closed, shielding you from the puttering raindrops on your windowsill. From the spacey pop-rock of the album's opener, "I Am the Time" to the somber-sounding Velvet Underground-inspired closing track, "Cosmonauts," one really must consider the possibility that Lou Reed had four love-children with Francois Hardy. - Left Off the Dial

After receiving and tightly clutching my copy of Morning Spy’s “Subsequent Light” I ran to my stereo and popped it in, like one could expect from a lab rat for his tiny hit of methadone. “Subsequent Light” couldn’t be a more fitting title, especially if one were announcing it to the indie rock legions… Morning Spy has crafted one of the most beautiful records I’ve heard in a long time. The male/female vocals shine amidst the exceedingly thought-comforting lyrics. Like a warm blanket enveloping you. With the addition of a second guitarist, they have added a more three dimensional, timeless, and layered aspect to the song craft, some call this shoe-gaze or shimmer-pop, however it’s true. This leaves you in a euphoric trance-like state, arguably a perfect album. This band will be on my mix-tapes, in my head, and causing random glassy-eyed smiles for years to come. Do yourself a favor and seek out this band. R.I.Y.L – The Shins, The Books, Elizabeth Elmore, Belle & Sebastien - Crookedcamera.net

Meet the little San Francisco indie-pop band that could. Remember the scene in the Michel Gondry directed flick Eternal Sunshine of the Spotless Mind in which Kirsten Dunst is dancing in her underwear on top of a bed with that guy? That song playing in the background should have been Morning Spy's “Please Stay Out Late” because it has that infectious bass line pertinent to a good pop song without coming off as too cheesy. If the band's previous three EP's left you longing for more, then you'll definitely want to check out the ridiculously enjoyable 11-song Subsequent Light. When thinking of Morning Spy's sound, bands such as Rilo Kiley with awkward vocals and Grandaddy with prolonged psychedelic guitar riffs come to mind. Greet them with handclaps and tap your glass at them. There's an element in Morning Spy's sound that epitomizes the laid-back California sound. Take a listen to the opener “I Am The Time” and “Accidental Stars” which were probably written to lie around all day swallowing in the California stars and making love. Call it chill rock or another term coined by a pretentious rock critic. They will have you sleeping the day away just like they say in “Sweet Taste of Joy.” Subsequent Light's stand-out song is easily “Daughter's of History,” in which Jon Rooney's (vocals, guitar) voice does not sound wonky and annoying. The recording flows with a pleasing mid-tempo beat courtesy of Mark Loftin (drums) and it has just enough subtle background vocals from Goffman. The sweet “Hey Kirsten” even has the obligatory “sha-la-la-la”'s thrown in mid-song. Subsequent Light is that album that has songs that make one want to think, sing, and dance in the dark. Morning Spy must be doing something right if National Public Radio's “All Things Considered” program featured “Slow Flood” on a recent program. Now if they could get their act together because they have so much potential. - West Coast Performer

Recorded by Bart Thurber at House Of Faith Recording Studios in Oakland, CA.

Bandcamp Daily  your guide to the world of Bandcamp

Featured sounds by K.Spark and WIZDUMB, plus Basi joins the show to discuss his latest release.